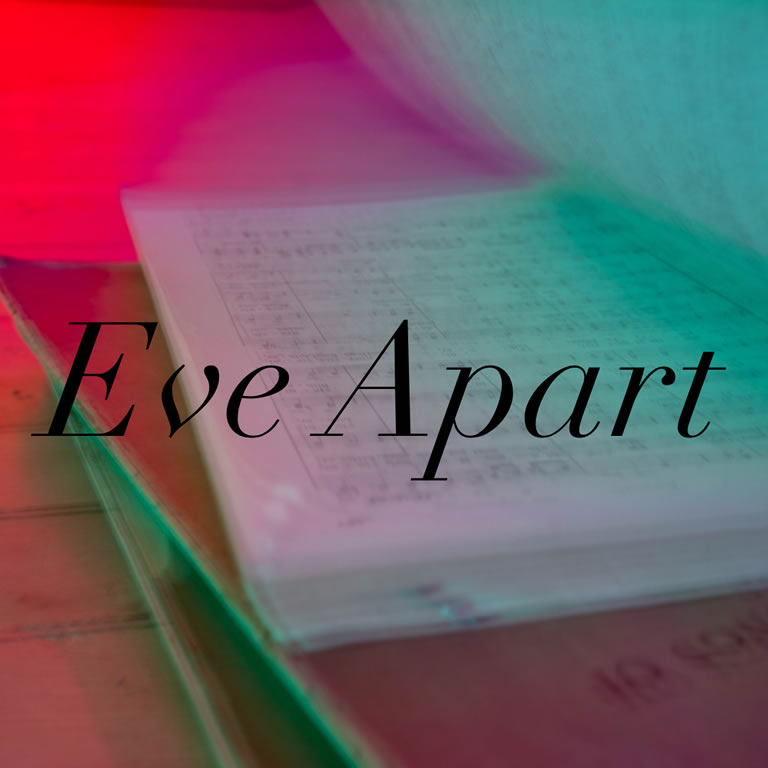 An Oratorio by Tim Hinck

“Imagine what the world must look like to God: a tiny spit of earth in a vast ocean of black space. Imagine what the world must look like to Eve, who having eaten of the Tree of Life, can never die; Eve, mother of all humans, surrounded by her children yet completely apart, different. She didn’t have a mother of her own. She wouldn’t even have a belly button. Everyone has a story about how it all began. History is just stories, but if you ask Eve to tell her side of the story, what might she tell?”

Based on the Jewish tradition of the Haggada, or scriptural commentary and embellishments, Eve Apart is a retelling of the Biblical creation story through the lens of mystical texts such as the Kabbalah and the Midrash. These texts include references to other “Eves” who were created for Adam, but were dismissed as inadequate. Eve Apart is an oratorio that can be semi-staged and augmented with video projection and light design as desired for a specific style of production. An early version of Eve Apart was premiered in Pittsburgh, PA in 2015; and subsequent performances have been presented in staged and concert versions. 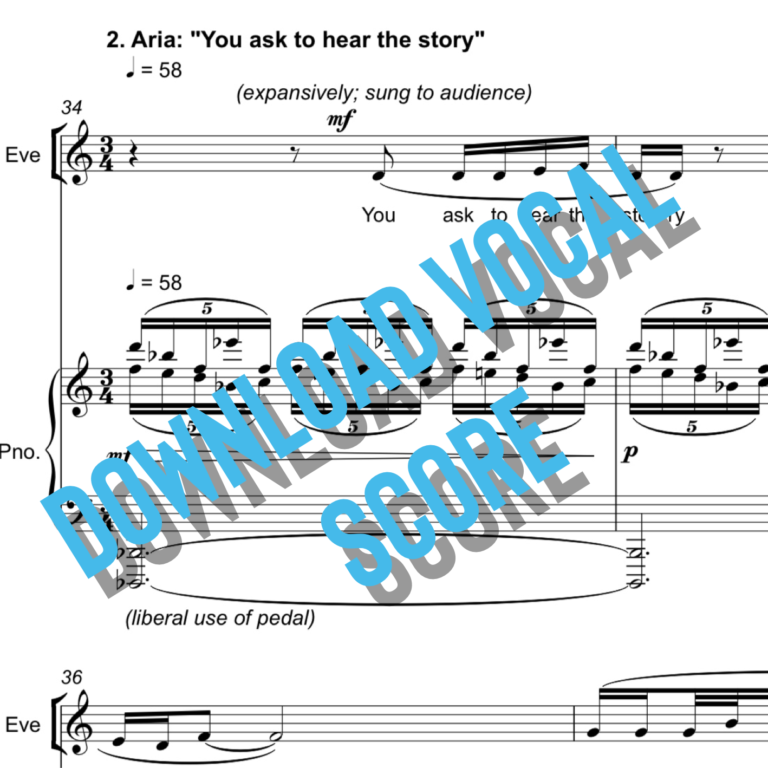 Eve, before her legions of descendants, as they persuade her to tell the story of creation:

Adam reliving the moment of seeing the world’s first childbirth:

The heart-wrenching finale at which Eve accepts blame for her shortcomings, shoulders her curse, and prays for a small portion of peace:

Eve and Adam step into their memories of the enchanting Garden of Eden:

An early production of Eve Apart (directed by Garrett Henson), Eve (Desiree Soteres) encounters the Serpent (Donovan Smith) for the first time in this haunting aria:

In the present, Eve, Adam, and the Serpent are still alive, having eaten of the Tree of Life, and they spend their time arguing over the fate of humankind:

The large trio that undergirds the third scene:

The Serpent’s music is heavily influenced by Jazz and more contemporary sounds:

“Working with Tim Hinck on various projects for my chamber music series at prisons has been wonderful. His ability to listen to ideas and add additional thoughts with passion is exactly the kind of artist I love working with. One can easily hear the positivity and enthusiasm in his compositions!”

“Deeply moving” (on the premiere performance of Hinck’s Digitalis)

“Tim’s extraordinary talent for composing an original score for a documentary I was co-producing for national television was immediately evident. He matched perfectly the mood and tone of the film to give it the overall epic feeling we wanted the piece to convey.”

“Chattanooga Symphony & Opera commissioned a work by Tim Hinck for its “Chattanooga Fanfare Project,” I had the most delightful experience premiering his work. Tim is creative, inspiring, and fun to work with, and it was truly a collaborative process. The audience really loved and appreciated his work, as their response was nothing short of enthusiasm.”

427Followers
732Followers
1.9kFollowers
3.1kTotal fans
Send this to a friend